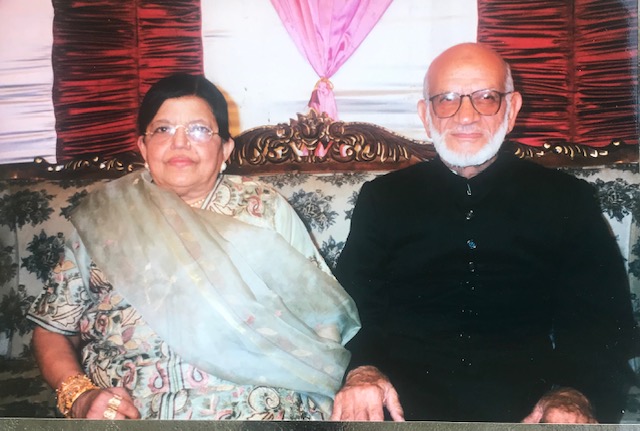 Sheikh Muhammed Zaki Lacewala was the eldest son of Amajan Shams un Nahar and Babuji Muhammed Naqi Lacewala. We heard on Thursday early morning that Shahid’s eldest brother passed away from Covid19 at the age of 94 after only a few days in the hospital. When the eldest in a large family leaves, they take a lot of history with them. So my blog today will honor the history and culture that Bhaijan represented and moreover his personal brilliant legacy.  For me it is an opportunity to revisit two miracles: one, the miracle of a life lived fully and two, the miracle of cultures and histories intertwining to create the beautiful tapestry of humanity.

Bhaijan was born in Delhi in 1925 in a Delhiwala family.  Delhiwala means “of” Delhi. What I learned after I got married to Shahid, is that the name is actually much longer. It is the “Delhi ke Punjabi Sodagran” meaning the Punjabi merchants of Delhi. As they migrated to Pakistan after Partition, although many are still in Delhi, they stayed together as a close community with their own agreements that were more specific than the general laws of life, also knowns as Sharia. In fact, in Karachi Bhaijan and his family live in an area called the “Delhi Mercantile Society”. I also learned that they were a tribe in Multan (now Pakistan) that converted to Islam and migrated to Delhi’s inner older city, called Ballimaran, which was also the neighborhood of India’s most famous poet Mirza Ghalib.  Every time I hear Ghalib’s poetry sung as ghazals, and a reference to Balimaran is made, I visualize the narrow lanes between homes (only one person could pass at a time) and the inner courtyards and verandas where life was lived, with coarse cloth curtains to shield from dust, heat and curious eyes. As a community I have come to admire the Dehliwalas’ principles of faith in practice, family loyalty, and excellence in business through hard work and community commitment.

I interviewed Bhaijan several times; once it was in his old office in MIthadar. which is the wholesale area of Karachi, deep inside the inner city. All of Shahid’s families had offices and storefronts there for their various wholesale businesses. In fact, most of their early businesses were in textiles, wool, etc. hence the name – Lacewallas (of Lace). I also remember marveling at the practice of food being cooked by their wives and sent on bicycles with tiffon carriers for lunch!  Take-out delivery must have been invented then and there.  The next time I interviewed him at his new office in a modern banglow/building near his house. I will always remember the energy, passion and joy with which he described both his personal and business life. He told me that he wrote in his diary every day before marriage, and that on the day of his marriage to Saleha Khatoon he wrote: “I got the wife I wanted”, and she happened to see it. So he would tease her that don’t let this get to your head!  We have been to several of his family weddings, which were always extravagant affairs with events for days and thousands of guests. The last one I attended was of his grandson Ersal to a lovely Pakistani-Australian girl. He told me about how he started the family business in Karachi: after he came to Pakistan from Delhi India, he bought a bike for Rs. 125 and he would follow camel carts bringing goods from ships that had docked at Karachi port; he then would offer to buy the goods from them and sell them for a profit.  From those humble beginnings, armed with his wit, relationship skills, work ethic and visionary leadership,  he built the family business in partnership with his father and brothers, and later on he built Zaki Industrial Corporation with his sons; today all his sons, grandsons and some of the granddaughters are taking Karachi businesses to a higher level, making them more global and impactful for the economy.

Bhaijan always made it a point to include me as I was new to their culture, being of from a Punjabi family and having spent more years abroad than in Pakistan.  He would ask me about my career and various conferences that I spoke at, and acknowledge his approval, even though in his community not only do men not work for others (as in professional jobs) but certainly women work the home, family and social networking and all the Adaab that come with that responsibility, which are many. I can’t imagine even a Swiss etiquette school competing with the Dehli wala Adaab. Adaab means customs and traditions, and these focus on behaviors that embody respect, generosity, harmony and community.  It is so heart-warming to know how well-preserved they are in this particular community, and I pray that they spread to other communities, and certainly that my grandchildren preserve and value this history, and these values which are so needed in today’s fragmented and individualistic culture. And we all wish Naeem, Farzana, Nasir, Nilofer, Abdullah, Shamoon, Farheen and their extended families our condolences and pray for Bhaijan’s soul as he joins his beloved wife Khatoon in heaven, Ameen.