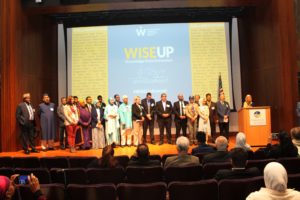 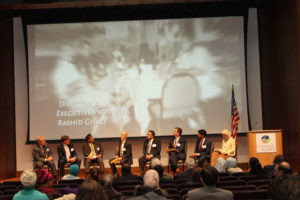 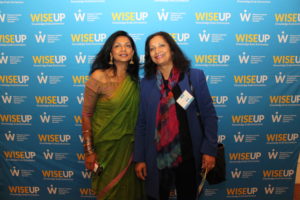 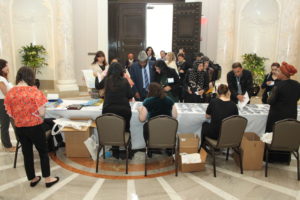 Last Thursday, October 25, my husband and I traveled to Washington DC to attend the WISE Summit at the Carnegie Institution for Science.  The objective of the summit was to launch the WISEUP Report – Knowledge Ends Extremism (www.wiseupreport.org) .  It was attended by people from many states, including scholars, activists, journalists, philanthropists, imams as well representatives of FBI, Homeland Security, etc.  Before the conference start, I ran to a nearby Starbucks to get coffee, and met two interfaith activist women who had traveled all the way from North Carolina to attend the event.  I was so moved that they would take the trouble to understand a besieged minority!

It was a most inspiring and hopeful day for me as an American Muslim as the voices of spirituality, peace and interfaith activism, religious leaders and scholars, social justice advocates, journalists from all races and faiths united to speak on the topic of hate, extremism, how knowledge ends extremism as well as how social and political forces can combine to hijack faiths and/or races at various times in history. It was most reassuring to hear how this has been a part of American history since its founding, and how the “politicization” of the faith of Islam is just another marker on a trajectory deeply embedded in our culture.  The panels were illuminating and reassuring at the same time, as they went deep to see the forces working towards hate, while spotlighting what is possible to create peace, love and understanding in the world today.

Many of the speakers were contributors to the WISEUP Report, a 300 plus page report on American Muslims, Islam the Faith and Extremist Ideology and how it uses faith as a disguise.  But to meet them in person was the most amazing experience- all of them bold truth-tellers dedicated to waging peace.  Many of them were young and had achieved so much in their young lives in terms of social change and institution building despite a hostile environment.  And of course there were wiser, older leaders too sharing their perspectives which added to the richness of the dialogue.  Sheikha Maryum from Bawa Moheyuddin Mosque opened the conference with a most beautiful invocation asking us all to access the divine “shifa” or healing within us to manifest and dispel with light the darkness.  It was most moving to hear from Imam Talib Shareef about the first mosque in America from built by slaves, 30% of whom were Muslims, in the DC area.  It was so inspiring to hear Hassanah El-Yacoubi speak about the role of identity and Islamic fashion- she is listed among the top modest fashion influencers by the Huffington Post! It was amazing to hear an ex-Far Right leader, Sammy Rangel, share how similar the extremist ideologies were in any faith or race, and how they targeted the same weak spirited people to do evil things.  It was fascinating to listen to John Kiser, who chose to follow and write about the life of Emir AbdelKadr, an Algerian leader, who embodied the values of civility and respectful engagement of all peoples back in the Middle Ages in North Africa. Ambassador Swanee Hunt surprised me with her honesty and how she paints a bigger picture of terror and terrorists and punctures the collective arrogance and judgment of those who point fingers by pointing it right back at them, such as pointing to the recent past, e.g. Bosnia War. I chuckled when Saeed Khan pointed out the “lactification process”, which is a process whereby minorities that were persecuted 100 years ago eventually prevailed, such as Catholics, Italians, etc. and were gradually allowed to join the “white” privileged majority.  And Shaikh Omar Suleiman reminded us to take stock of the bigger picture too, which is how wars and terrorism are linked and that most victims of terrorism are Muslims.  I was shocked when one of the speakers said that US bombs kill 12 Muslims a day, and I am determined to find out the source of this information.  Soraya Deen spoke beautifully about the role of parents and how she has applied the principles of non-violent communications to parent/child relationships to build strong, independent and wise identities.  I have shared her “transactional” and “transformational” parenting model with my kids who are parents- it is so practical. Daisy Khan, the Executive Editor and my very dear friend, was given a standing ovation, and should continue be appreciated and celebrated for her convening power and vision in putting together this report, as well as the tenacity of the WISE team in sticking it through and completing it after several years of sheer hard work and passion!

The report is a practical reference guide with amazing contributions organized in an easy-to-access and utilitarian way so that each page or graphic or section from the report can be a fantastic tool for dialogue, engagement, understanding and learning.  The organization of the report is brilliant and comprehensive: Part 1 focuses on American Muslims- who we are; Part 2 focuses on Islam and Islamic theology vs. Extremist theology; and Part 3 focuses on preventing extremist recruitment and countering hate. The layouts are attractive and help the user leverage components, almost like a toolkit!  And amazingly the knowledge distilled is so vast and therefore putting it at our fingertips is a major achievement. E.g. there are 2 pages in the book which show the history of Islam in a quick easy to grasp graphic- even Muslims like me need these reminders.   We all need to seek greater knowledge of our own faith and of others’ faith, and what a brilliant way to do it.

Sitting in the audience, soaking it all in, I felt a strong wave of hope rise within me that “this too shall pass” and human dignity, intelligence, dialogue would prevail despite the barrage of screaming voices that sow hate and division which they know silently winks a go-ahead for violence and those who profit immensely from it. How lucky I am, I said to myself, to actually be in the presence of such grace, such intelligence, such patience, such vision and such hope.  I promised I would take this experience with me and never let it go. It was a precious gift I received, and now my job was to pass it on. I want to tell everyone that humanity is within our reach and we can bring it back again; I want to tell others to seek knowledge and share knowledge and learn, learn, learn! I want to tell others that I always knew my faith is beautiful and deep, and no “terrorist” or “War on Terror” can steal that away from me! I want to tell others that behind the manufacturers of fear are a whole series of industries profiting infinitely. I want to tell others that extremists exist in all faiths, and we have to illuminate their deceit and evil but also understand their root causes and heal their hurt, their pain, their suffering whether it is from bombings or layoffs, the losses that they in their wounded hearts hold onto, who then become easy fodder for maniacal cults no matter which faith or nation they steal their names and disguises from.

Thank you, thank you WISE and Daisy Khan and all the contributors, interns, supporters, funders, well-wishers and sponsors for making this possible. Future generations will thank you too. 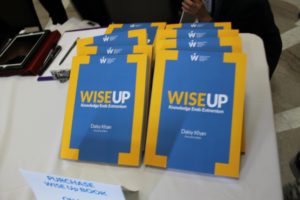 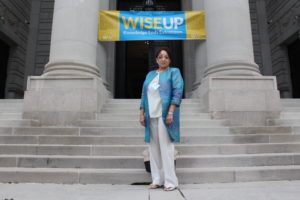